Updates
This Database is updated every 120 Days. Master License holders can purchse updates for this database for $37.50.
PUBLICATION RIGHTS
$350.00

About Ethnic and Minority Owned Businesses 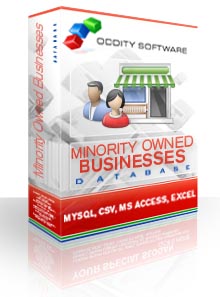 There are a number of advantages that minority owned businesses can gain from governments and large corporations. In some cases, both governments and corporations will reserve specific contracts for these businesses, and this can be used by the business to become more profitable. In order for a business to receive these benefits, they will need to apply for a Minority Owned Business Certification. This process can be tedious, and the company must demonstrate that it is owned and operated by people who are classified as minorities. Despite this, it is important for business owners to realize that getting this certification will not guarantee that they will be given contracts from either governments or corporations.

Given this situation, it is important for business owners to consider whether or not they will be able to become certified. Another issue that is connected to this is whether or not a minority owned business should market their products or services to a larger organization. The answer to this question is dependent on the quality of your business. Because the process of getting a certification can involve a great deal of time and money, it is important for business owners to find out if the government or corporation is already purchasing products that they offer. Once you find that the organization is purchasing the products you offer, this will set the stage that may allow you to become certified.

There are a number of organizations that offer minority owned business programs, which are more formally called Supplier Diversity programs. The goal of organizations that offer these programs is to conduct business with companies that are owned and operated by minorities. The term "minority" in this context may be used to refer to businesses that are owned by those who are of Asian, African, or Hispanic descent. However, this is primarily in the United States, and the definition of minority may vary from one country to the next. The quality of these programs may vary greatly. Some large companies will offer these programs in an attempt to reduce their own costs of operation while improving profits simultaneously. Some companies may simply use Supplier Diversity programs for PR purposes.

If you are a business owner who is looking to take advantage of one of these programs, there are a number of things you will want to look for. It is first important to look for an organization that is clearly committed to the program. Everyone in the company should support it, even the corporate executives. They should also have detailed goals for how many products they will purchase from businesses that are owned by minorities. If the company is serious about the program, these goals will be connected to the profits of the organization. The Supplier Diversity program should also be an important part of the overally strategic diversity strategy for the company. A company that has already begin purchasing products from minority owned businesses should have a database which shows this.

Minority owned businesses have historically played an important role in industry and service, and they continue to do so today. While many large corporations only included diversity plans that dealt with the law, attitudes have begun to change over the last few years. There are a number of reasons why large corporations should work with minority owned businesses. One reason for this is a concept which is known as "ethnic marketing." Introduced during the 1990s, ethnic marketing is the result of many corporations realizing that minorities make up a sizeable portion of the population, and using a form of marketing which is specifically targeted to them could increase profits. Perhaps one of the best places to get information about this portion of the population was businesses that were operated by minorities.

Ethnic marketing requires a company to make a number of changes to their overall strategy. Some of these changes will need to occur at the basic level. The concept of ethnic marketing begin with the Civil Rights Act of 1968, which is also known as Affirmative action. While some have said it is being abused today, Affirmative action was originally used to deal with discrimination that occured in the corporate world. While many companies were resistant to Affirmative action at first, it has opened a lot of doors in the corporate world that has allowed corporations to become much more competitive. However, there are additional reasons why minority owned businesses have become so important in our world.

Globalization is a concept that is affecting more and more businesses each day. Not only do large corporations need to be concerned with competing with domestic partners, but they must also be concerned with competing with foreign companies on an international level. It is no longer simply enough for a company to cater to customers that reside within the country its based in. The executives must also consider the task of being able to market their product to people living in foreign countries. To achieve this task, it has become necessary for many of these companies to begin creating strategic partnerships with minority owned businesses. In addition to this, hiring employees to the company that come from diverse backgrounds can also allow the company to become more competitive on a global level.

A sizeable percentage of large companies are now using minority owned businesses as their suppliers. One of the reasons for this is because costs. Traditional suppliers tend to be much more expensive, and many large corporations are looking for creative ways to reduce their overhead. Using businesses which are owned by minorities is a strategic move that can allow them to save exceptional amounts of money over the long term. Many large companies find that not only are minority owned businesses lower in cost, but many of them are also more qualified than their primary suppliers. As the population of minorities continues to grow, more companies will need to market to them if they wish to become competitive. On an international level, it can be difficult for a company to succee if they don't become truly diverse.

An Excel Spreadsheet has been created with some sample data from this database. You can download this sample spreadsheet here: Ethnic and Minority Owned Businesses Database