Updates
This Database is updated every 120 Days. Master License holders can purchse updates for this database for $25.00.
PUBLICATION RIGHTS
$300.00 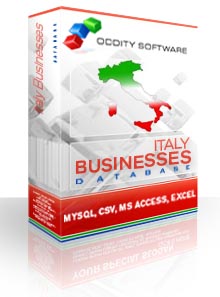 There are a number of opportunities for entrepreneurs and small businesses that are looking to operate in Italy. If you are in the need of professional advice, there are a number of consulting firms available that can assist you with this. If you wish to do business in Italy, it is best to contact a consultant as soon as possible. Before you do this, it is first important to learn a bit about the statistical information that is related to this country. Italy is a Mediterranean country that has a GDP of about $1.1 trillion. Inflation is approximately 2.5%, and the primary currency is the Euro. The country has a population of about 60 million people. The capital city if Rome, but there are a number of popular cities for business and commerce.

Some of these are Naples, Milan, and Florence. The countries which are responsible for importing the most products to Italy are France, the United States, Germany, and Spain. The Netherlands is also known for importing a number of products to Italy. The industrial sector of Italy is very diversified. It has an output which is very similar to France. Like many countries, the economy is based on capitalism, and while the northern part of the country is highly industiralized, the southern portion of the company has an increased unemployment rate, which some list as being as high as 20%. Italy is dependent on foreign countries when it comes to both raw materials and energy sources. Statistics show that over 70% of these products are imported.

A number of changes have occured in the region since the country was transformed into a Republic during the 1940s. Overall, Italy has one of the largest economies in the world. One of the reasons why Italy is so successful is because of the advent of small businesses. Many of these businesses are family operated. Many of these small businesses are centered in specific regions around the country. Many of these specialize in the sell of various products and services. Perhaps the strongest industry in Italy is the manufacturing sector. Italy is a leading in the production of automobiles, clothes, furniture, leather, and textiles. The the country is also renown for its production of ceramic goods. A number of statistics indicated that over 30% of the Italian population works in the industrial field.

While the manufacturing sector has remained traditionally strong, the service sector is catching up. A number of recent studies indicate that the service sector is now responsible for over 60% of employement. Another popular industry in this country is tourism. Italy has a rich culture and history that stretches back thousands of years. It was home of the Roman Empire, and Italy has continued to have a powerful effect on Europe for many centuries. Unlike many regions, Italy is a good country to visit at any time througout the year, whether is fall or winter. There are a number of sole proprietors who have been successful in the region, and Italy has a lot to offer to businesses that are interested in investing in the country.

An Excel Spreadsheet has been created with some sample data from this database. You can download this sample spreadsheet here: Italy Businesses Database