Download our U.S. Churches Database List. This database contains 110,003 records of Churches locations and places of worship leads. This content database can be downloaded in CSV, MySQL and many other formats.

About Church of Christ Churches 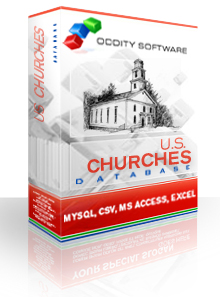 The Church of Christ is a group of Christian churches that act independently of other organizations. Those who are members of this church express their believe in the original church that was founded by Jesus, which is much more simple than the highly elaborate institutions which exist today. In the United States, the existence of the Church of Christ is directly connected to what many call the Restoration Movement which started in the 18th century. The Restoration Movement was initiated by Alexander Campbell and his father Thomas Campbell. A number of attempts have been made throughout history to return to the original church structure that was established by Christ.

Unlike Catholics, members of the Church of Christ do not believe it is necessary to trace a lineage back to the original church that was created by Jesus. The reason why members of the Church of Christ believe this is because they see the church as being a spiritual institution rather than a secular institution. It should be noted that even the Church of Christ has been split into smaller groups due to disagreements that have occured due to different beliefs. However, there are a number of things that all Churches of Christ have in common. First, they do not believe in using creeds that do not originate with the Bible. They also do not practice baptizing infants. They will only offer baptism to adults of young people.