Updates
This Database is updated every 120 Days. Master License holders can purchse updates for this database for $10.00.
PUBLICATION RIGHTS
$80.00 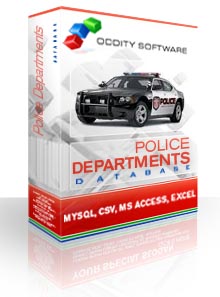 This database includes listings for all Police Departments and Police Stations in the US. Police forces are government organizations charged with the responsibility of maintaining law and order. The word comes from the French, and less directly from the Greek politeia, referring to government or administration; the word police was coined in France in the 18th century. The police may also be known as a constabulary, after constables, who were an early manifestation of police officers.