Updates
This Database is updated every 120 Days. Master License holders can purchse updates for this database for $37.50.
PUBLICATION RIGHTS
$400.00 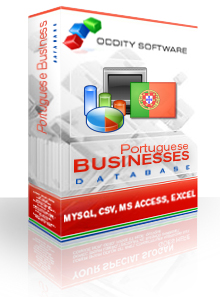 Portugal is a country that has a total population of over 10 million people. It sits to the west of Spain, and though the two countries are located next to each other, Portugal maintains its own political and administrative system. Those who are interested in conducting business in this country will need to become familiar with its laws and regulations. Those who are considered to be foreigners or aliens will have the same rights as the native born citizens who reside in the country. If a foreign company is interested in investing in Portugal, they must be registered with the ICEP, or the Portuguese Institute for Externala Trade. The laws regulating these companies will be the same laws that national companies must follow.

However, if the investment in Portugal will greatly contribute to the success of the nation, it is possible for businesses to gain a number of excellent benefits. The Bank of Portugal plays an important role in dealing with monetary issues. Their policies and practices must comply with the laws of the country. The Assembly of the Republic is responsible for handling taxes. Any companies that wish to do business in the country will be taxed on their maximum income annually. Any taxation that occurs for donations will be progressive, and there are a number of different taxes that the Portuguese government will place on individuals.

Companies that compete in the agricultural sector will be taxed, as well as companies that work in the industrial sector. Capitals gains and pensions are subject to taxes as well. Taxable income is considered to be income that comes from various sources. The gross income of tax payers may have a deduction of about 70%, and there are a number of items that can be used for deductions. One of these is the repair of equipment that is necessary for operating the business, as well as certain forms of insurance and power expenses. Statistics show that Portugal generated about $880 million in goods for the year 2004.

The exported products which are highly popular in this country are processed foods, chemicals, seafood, and computers. Equipment for transportation is important as well. There are a number of market challenges that companies will face when attempting to do business in this region. The market became turbulent when a respect Prime Minister was elected to becom the European Union president. In addition to this, those who wish to do business in Portugal will need to be prepared to compete with various European companies that are also present in the market. Because these companies are based in European, they are already familiar with Portuguese customs and laws, and some may have an edge on foreign companies that are not based in Europe. Unlike American companies, European companies don't have to deal with import tariffs.

However, Portugal is not a country that is without opportunities. Recently, the American dollar has been low in comparison to the Euro, and this has created an excellent opportunity for American companies to export products to both Portugal and other countries in Europe. Many Portuguese citizens have the belief that while American products are high in quality, they are costly compared to products imported from other countries.

An Excel Spreadsheet has been created with some sample data from this database. You can download this sample spreadsheet here: Portugal Business Database Sample