Updates
This Database is updated every 120 Days. Master License holders can purchse updates for this database for $10.00.
PUBLICATION RIGHTS
$100.00 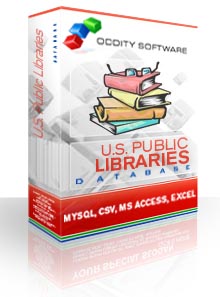 The Libraries in the United States can be defined as institutions that store various types of information. While this information will generally come in the form of books. However, there are a number of storage devices being used for information today, and some of these are films, computers, microfilm, and other formats. It should also be noted that there are various types of libraries in the US. Some libraries will be dedicated to the collection of information that is related to a specific subject. The libraries that collect information on a specific topic will often be a part of associations which feature other libraries of the same type.

The United States is home to a number of national libraries. One good example of this library is the Library of Congress, which can be found in Washington D.C. This library is supported by the public, and will also be used to assist the government in various matters. The use the libraries has a long and rich history. The process of maintaining information and records has existed for thousands of years, and was first established in the Middle East around 2000 BC. The oldest libraries in existence where maintained by the Sumerians, and the manuscripts were comprised of clay tablets that displayed information written in cuneiform. These manuscripts would contain information about business and other important issues at the time, and a few of the surviving manuscripts can still be seen today.

Unfortunately, many of the ancient Sumerian libariers were destroyed by fire. Ancient Egypt was home to a number of impressive libraries, and one of the most impressive was the library that was constructed by the Greeks in Alexandria Ramses II was also responsible for the introduction of a library that was comprised of thousands of papyrus scrolls. Despite this, the library constructed in Alexandria by the Greeks was considered to be one of the greatest libraries in history. It was introduced around the 3rd century BC, and it was considered to be a center of learning by the ancients. Not only was this building a library, but it also served as a museum. At its height, the library at Alexandria contained approximately 700,000 papyrus rolls, a stupendous amount of information, even by the standards of the 21st century.

Unfortunately, this library was destroyed, and much of the information has not survived until the present day. However, many Muslim scholars were responsible for recording the information that had been produced by the Greeks, as well as their own unique data. When the Chinese introduced new methods of producing paper, the cost of books were dramatically decreased, allowing more people to have access to them. In much of Europe, monks were responsible for preserving information during the Middle Ages. While there were a number of prominent libraries througout the world, it wasn't until the invention of the printing press by Johann Gutenberg that libraries begin to rise in popularity. Libraries in the US became prominent during the early 18th century, and the largest libraries are those that exist in the digital format on the Internet.

An Excel Spreadsheet has been created with some sample data from this database. You can download this sample spreadsheet here: Sample U.S. Public Libraries Database Data