Updates
This Database is updated every 120 Days. Master License holders can purchse updates for this database for $12.50.
PUBLICATION RIGHTS
$150.00 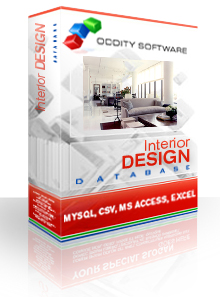 In places such as the United Kingdom, tasks that would normally be associated with interior decorators are carried out by upholsterers. In France, the term used to describe an interior decorator is "marchand-mercier." A large number of architects around the world have also acted as interior decorators. As with many art forms, there are various styles of interior design that have become popular over the years. Some of these styles are the Gothic style, Neoclassical style, and the Rococo style. The first modern interior designer that gained a great deal of popularity was Elsie De Wolfe, who became prominent in New York. While interior designing has become a field that many people go through college to learn, some of the most famous popular interior designers in history had not college education on the subject.

One of the most central concepts to interior design is the "room theme." A room theme is a style that will be used in the entire room to create a specific "feel." Designing the entire room with this style will create what is called completeness. For example, if a dining room was created with 17th century French furniture, lights, paintings, cabinets, and wallpaper, it would have a specific room theme. If someone designed a room with a traditional Japanese theme, one would expect that the room would use Japanese furniture, art, lighting, and fixtures. While room themes were originally connected to specific time periods throughout history, an evolution has occured in the industry over the last few years.

Many interior designers are now creating specific room themes that are not consistent with any historial period. Some designers have even mixed furniture and fixtures from different periods, or they'r inventing new styles altogether. Even if different elements are used in the theme of the room, they must all be equal in quality. The standard for all the elements must be identical. The necessary education required for interior decorators has dramatically changed since the concept was first introduced. While many early interior decorators were not formally educated in this field, a number of universities are not offering various degrees in the subject. The highest degrees offered for interior design are the masters degree and the baccalaureate degree.

While many colleges choose to use the name Interior Design, many countries outside the United States choose to use the term Interior Architecture. In most European countries, the educational requirements for interior decorators may vary. In countries such as Germany, the field of interior architecture is featured at a number of polytechnic universities. It is important to realize that interior decoration was not historically connected to the working class. The people who would generally use it the most were the wealthier citizens and royal families. However, historical events such as the Industrial Revolution and the advances of technology have dramatically reduced the costs involved with interior decoration, and it is now within the price range of most working class citizens living in developed countries.

Interior decoration has become a popular topic of television shows in many Western countries, especially the United Kingdom and the United States. While the concept of interior decoration does originate in European countries, similar art forms were present outside of Europe. One of the best examples of this art form is Feng shui, which is a Chinese procedure of arranging homes, furniture, and fixtures in such a way that they maintain harmony with the surrounding environment. While many people consider it to merely be a superstitious practice, it has become widely popular outside of East Asia. While there are a number of similarities between interior decoration and Feng shui, it is important to realize that Feng shui is not a style of decoration.

Instead, Feng shui is more of an art form that can incorporate various styles. Many Western interior decorators have borrowed various concepts from Feng shui and have used in their own projects. Unlike interior design, Feng shui touches on a number of fields simultaneously, and some of these are philosophy, mathematics, and astrology. There is "good Feng shui" and "bad Feng shui." The way in which a homeowner chooses to structure their home will determine if they fall under one of these categories. Overall, interior decoration has a history which is long and rich. It is responsible for the development of a number of different styles, and new styles continue to be developed on a consistent basis. In addition to this, the advent of industrialization has made it possible for a larger portion of the population to enjoy this art form. Those who aspire to being interior decorators can attend college to be formally trained in the subject, and can become professionals in this field.

An Excel Spreadsheet has been created with some sample data from this database. You can download this sample spreadsheet here: Interior Designers Database Sample