Download our Starbucks Locations Database List. This database contains 14,461 records of Starbucks locations in North America. This directory is available in CSV, MySQL and many other formats. Includes Drive Thu, WiFi and Airport Flags for Starbucks

Updates
This Database is updated every 120 Days. Master License holders can purchse updates for this database for $8.75.
PUBLICATION RIGHTS
$90.00 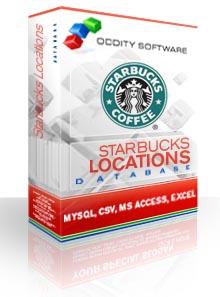 Starbucks has become the very first coffee shop in history to become a multinational corporation. Even though it has become a household name today, Starbucks had fairly humble beginnings. The company was originally founded in 1971, and it was purchased in the late 1980s by Howard Schultz. It was Schultz who became responsible for helping the company reach the popularity it has obtained today. While Starbucks is primarily known for its coffee, it also serves sandwiches and baked foods. The very first Starbucks coffee was created in Seattle, Washington. There were three people responsible for its creation, and they were Gordon Bowker, Zev Siegel, and Jerry Baldwin.

The original goal of the company was to sell high-end coffee using specialized equipment. While the shop was first located on Western Avenue, it was eventually moved to Pike Palace. While the founders of Starbucks started out by purchasing their coffee beans through an intermediary, they eventually started purchasing the coffee beans from the actual growers. In 1982, Howard Schultz became a part of the company, and after returning from a trip to Italy, he decided that the company should add espresso to its menu. At first, the owners were against this idea, and felt that the introduction of espresso beverages would take away the emphasis that the company originally placed on coffee.

Despite this, Schulz saw the potential profits that could be gained by selling espresso beverages to busy people, and he founded the II Giornale coffee bar a few years later. This coffee bar would eventually become a chain. By 1987 the founders of Starbucks decided to sell the business to Schultz, and he quickly integrated his existing business with Starbucks and dropped the name II Gironale in favor of it. Within a short period of time, the business begin to grow outside of the Seattle area. It first expanded into Vancouver before moving into Chicago. The first Starbucks to be operated outside of the American content was opened in Tokyo in the mid 1990s. This would eventually expand to become 30 foreign countries.

Starbucks appeared in the United Kingdom by 1998, and when the company first offered its IPO to the public in 1992, it had already grown to 165 outlets. By 2003, Starbucks had gained this many stores in the course of a single day. Currently, Starbucks has grown to well over 6,000 stores worldwide, and some cities have been known to have Starbucks shops sitting in close proximity to each other. Ironically, no Starbucks shops have been opened in Italy, the country that originally inspired Schultz to come up with the idea. This may very well change at a future date. As of 2006, Starbucks has become a multi-billion dollar company. The name and logo for Starbucks was borrowed from the novel Moby-Dick. Like many multinational corporations, Starbucks has become the subject of controversy due to issues surrounding the impact of globalization. The success and criticism of Starbucks is very similar to the pattern that has been seen in other large companies such as Walmart or Mcdonalds.