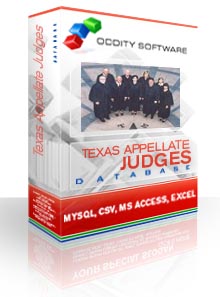 This database contains all current Texas State Appellate Judges. This is a judge of a provincial Court of Appeal. Trials first take place at the trial court level. Once a decision/verdict has been made at that level, either side may appeal either all or part of the ruling. For example, if an accused was found not guilty, the Crown can appeal that decision. If the accused was found guilty and a certain penalty imposed, the Crown can appeal the penalty if she/he does not feel it is appropriate. If an accused is found guilty, he can appeal the finding of guilt or the penalty or both.

An Excel Spreadsheet has been created with some sample data from this database. You can download this sample spreadsheet here: Sample Data

1,733 Total Records.
This is NOT an email marketing list