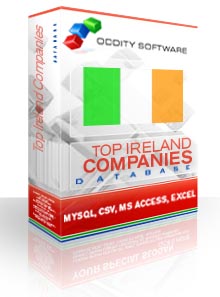 Ireland is the third-largest island in Europe. It lies on the west side of the Irish Sea, and is part of the geographical (but not political) British Islands archipelago. It is composed of the Republic of Ireland which covers five sixths of the island (south, east, west and north-west) and Northern Ireland, currently a part of the United Kingdom, which covers the northeastern sixth of the island.

An Excel Spreadsheet has been created with some sample data from this database. You can download this sample spreadsheet here: Top Ireland Companies Database