Updates
This Database is updated every 120 Days. Master License holders can purchse updates for this database for $5.00.
PUBLICATION RIGHTS
$45.00 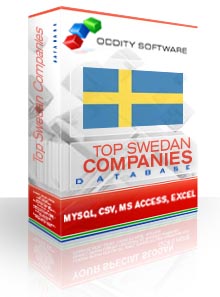 Aided by peace and neutrality for the whole 20th century, Sweden has achieved an enviable standard of living under a mixed system of high-tech capitalism and extensive welfare benefits. The government's commitment to fiscal discipline resulted in a substantial budgetary surplus in 2001, which was cut by more than half in 2002, due to the global economic slowdown, declining revenue, and increased spending.

An Excel Spreadsheet has been created with some sample data from this database. You can download this sample spreadsheet here: Top Sweden Companies Database

Database contains 1,470 records for the Top Sweden Companies
This is NOT an email marketing list