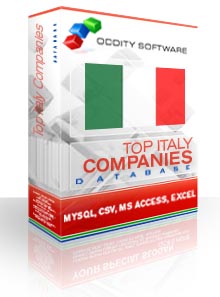 Italy began to industrialize late in comparison to other European nations, and until World War II was largely an agricultural country. However, after 1950 industry was developed rapidly so that by the 1990s industry contributed about 35% of the annual gross domestic product and agriculture less than 4%. The principal farm products are fruits, sugar beets, corn, tomatoes, potatoes, soybeans, grain, olives and olive oil, and livestock (especially cattle, pigs, sheep, and goats). In addition, much wine is produced from grapes grown throughout the country. There is a small fishing industry.

An Excel Spreadsheet has been created with some sample data from this database. You can download this sample spreadsheet here: Top Italy Companies Database