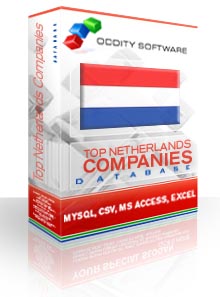 As an open economy, the Netherlands is susceptible to international developments, notably in recent years the global recession â which has been exacerbated by falling share prices, the attacks of 11 September 2001, the war in Iraq and the outbreak of SARS. Nevertheless, the Netherlands was the world's eighth largest exporter of goods and services in 2003. Its workforce numbered 7.5 million, three-quarters of whom worked in the service sector. Per capita gross domestic product (GDP) was â¬27,900. The unemployment rate was 5.3%. And growth was strongest in the public sector, education and health care.

An Excel Spreadsheet has been created with some sample data from this database. You can download this sample spreadsheet here: Top Netherlands Companies Database