Download the Billiards and Pool Database. This database contains 5,118 records of Pool Halls locations and Pool Halls leads. This content database can be downloaded in CSV, MySQL and many other formats.

Updates
This Database is updated every 120 Days. Master License holders can purchse updates for this database for $8.75.
PUBLICATION RIGHTS
$70.00 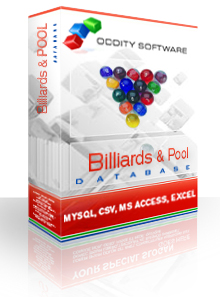 Billiards is a time-less game that is popular in many parts of the world. Billiards is played with a table, cue sticks and balls. The popularity of billiards is that anyone can play it. And because it is an indoor game, it may be enjoyed at any weather.

There are many types of billiards games but in many parts of the world, billiards has become synonymous with the game 'pocket billiards' or 'pool'. Pocket billiard games are 8-ball, 9-ball, straight pool and one-pocket. Billiards is now considered as a sport with often high-stakes matches played by world-class, professional players.

With 8-ball, the goal of the game is to claim a suit of balls, either solid or stripe and pocketing them all and then pocketing the 8 ball. In 9-ball, only the balls numbered 1 to 9 are used and players have to pocket the balls from the lowest number to the 9 ball. In straight billiards, a player has to pocket a ball with his cue ball and continue shooting every time his cue ball touches a numbered ball. Professional and highly-skilled players are able to play straight beginning the 'break' or when the set balls are first hit. One pocket is a defensive game of pool where two players are each assigned a single, specific pocket where he can legally pocket a ball. The player to 'shoot' most of the balls into his designated pocket wins the game. The trick is into positioning the balls in a favorable spot every turn and making sure there is no opportunity left for the opponent to pocket a ball in his designated pocket.

As in any sport, pocket billiards require some sort of financial investment if the player wants to be good at it. Basic equipments include the table, a cue stick, and balls. Other items needed are the rack, the bridge also referred to as the mechanical bridge, and the cue and hand chalk.

Most popular among the tables are the 9-footers but there are also 7, 8 and 12 footer tables. The name refers to the length of the longer side of the table. Cue sticks come in a single tapered unit or in two pieces joined together in the middle by metal or phenolic resin screws. Professional players prefer to use the two-piece set which is easier to bring in tournaments and are usually made of hardwood. The number, size and color of balls used vary with every game but almost all balls are entirely made of phenolic resin.

Quality equipment may be costly but they are sure to last for many generations.