Updates
This Database is updated every 120 Days. Master License holders can purchse updates for this database for $6.25.
PUBLICATION RIGHTS
$60.00 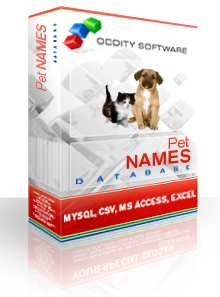 This database contains listings for pet names. Paet names are categorized by sex: Male/Female and Animal: Dog/Cat. This Pet Names List is a perfect tool for help naming your pet

Most pet owners have ceased giving their pets generic names that often describe the way the pet looks. Names like: Fluffy, Spot or Kitty have been sliding down the list of favorite pet names in the last few years. Because pets are often considered part of the family, pet owners have taken to giving their pets names that will fit any human, anytime.

More and more people are thinking of unique names for their pets and take inspiration from various cultures, movies, music and pop elements. Most names have also lost their exclusivity to cats or dogs as most modern names like Max, Lucy, Kate and Jake may be used for both cats and dogs.

The pet's name not only gives people an insight on the pet's character but more importantly says a lot about the personality of the pet's owner. Tough people usually give their pet tough sounding names like Spike, Rocky or Max. Girly owners who have female pets may choose feminine names like Queenie, Taffy, Sugar, Missy or Princess. Yuppies may name their pets after book authors, software programs or even workmates. Music lovers may name their pets after a song, a band, or an artist.

Some people name their pets after popular people or people that they admire. There are a few cats and dogs named Einstein, Jackie, Cleopatra and Britney. Gaining popularity are pets named after animated characters like Simba, Garfield, and who will forget Paris Hilton's pint-sized Chihuahua named Tinker Bell?

Pet names may be as common or as unusual or even weird as possible. The name choices are limited only by the pet owner's imagination.

An Excel Spreadsheet has been created with some sample data from this database. You can download this sample spreadsheet here: Pet Names Database