Download our Indiana White Pages Residential Database List. This database contains 2,235,779 records of Indiana Consumers locations and leads. The IN Phone Book Marketing Database can be downloaded in CSV, MySQL and many other formats. 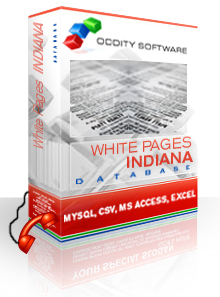 Indiana is a U.S. state that can be found in the Midwest. It has a total population of about 6 million, and it was admitted to the Union in December of 1816. Unlike many states, Indiana is highly diverse. While it has a number of important cities, there are also small towns which are equally important. This state is perhaps best known for its Indianapolis 500 race, which attracts visitors from around the world, and is held each year. Of all the states in the U.S., Indiana has an prehistoric Indiana site that is greatly preserved in the southern part of the state. The largest city in the state is Indianapolis, and the states which border it are Kentucky, Ohio, Illinois, and Michigan. Indiana is located near the Great Lakes, and one of the most prominent is Lake Michigan.

The GSP for Indiana in 2005 was $214 billion. Unlike many states, a sizable percentage of the income is a result of the manufacturing industry. The northwestern part of Indiana is known for its steel production, and a large number of automobiles are also manufactured here. Some of the other important materials that are produced by this state include coal, rubber, petroleum, and various forms of machinery. While many states have been adversely effected by competition in the manufacturing sector, it appears that Indiana has weathered the storm. Once cited reason for this is because this state deals with heavy machinery, which takes a great deal of skill to produce. In addition to this, skilled labor can be found in many smaller towns rather than just the major cities.

The Indiana White Pages Phone Directory Database includes residential phone and address data for the state of Indiana. These listings are updated on a 90 day basis to contain the freshest possible phone directory data.