Download our Kentucky White Pages Residential Database List. This database contains 1,508,787 records of Kentucky Consumers locations and leads. The KY Phone Book Marketing Database can be downloaded in CSV, MySQL and many other formats. 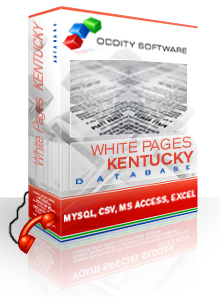 Kentucky is a state that is located in the south central part of the U.S. While it is commonly referred to as being a southern state, it is sometimes called a midwestern state as well. Kentucky is one of the few states that is an commonwealth. It was once a part of the state of Virginia, but it became a part of the Union in 1792, and it was the 15th state to do so. About 50% of the population is centered near Lexington, North Kentucky, and Louisville. While the largest city in this state is Louisville, Frankfort is the capital. This state has been given the nickname the "Bluegrass State" due to the bluegrass that is present throughout the land. Some of the things that this state is known for are its horses, whiskey, and bluegrass music.

The population for Kentucky is just over 4.7 million. This state is bordered by Virginia, West Virginia, Illinois, Ohio, and Indiana. It is a landlocked state. Unlike many states in the south, Kentucky has a climate which is humid continental. The GSP for Kentucky was $140 billion in 2005, making it one of the largest in the region. Some of the agricultural products that are produced here are corn, tobacco, dairy products, and cattle. Horses are popular as well. Some of the industrial products that are produced in this state include chemical tools, as well as transportation, tobacco, and food products. Tourism has also played an important part of its economy. This state is ranked number 4 when it comes to the production of automobiles. Some of the vehicles that are constructed in Kentucky include the Ford Expedition and Chevy Corvette.

The Kentucky White Pages Phone Directory Database includes residential phone and address data for the state of Kentucky. These listings are updated on a 90 day basis to contain the freshest possible phone directory data.