The Utah White Pages Phone Directory Database includes 777,730 residential phone and address data leads for the state of Utah. These listings are updated on a 120 day basis and are available in MySQL, CSV, Access and Excel 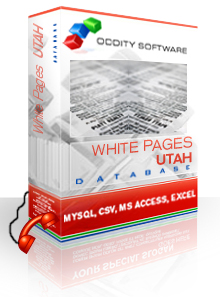 Utah is a state that is located in the western portion of the U.S. It was added to the Union in January of 1896, and it was the 45th state to be added. Utah is unique in that over 80% of its population lives in close proximity to the Salt Lake City metropolitan area. Because of this, a large portion of this state is not inhabited. The total population of Utah is approximately 2.5 million. Geographically, Utah is broken down into three sections, and these are the Colorado Plateau, the Rocky Mountains, and the Great Basin. In addition to forests, Utah has a large number of mountainous areas. A portion of this state is located in the Mojave Desert, and it can become extremely hot during the summer months.

The eastern portion of Utah is known for its mining and natural gas industries. In addition to this, there are a number of recreational centers in the state, and ski resorts are quite popular. One of the largest Native American reservations is the Uintah and Quray Indian Reservation. Native American tribes have inhabited this state for at least 10,000 years. Utah is also known for its large Mormon population, and they have a great deal of influence in the state. The GSP for this state in 2004 was approximately $82 billion. In the eastern part of the state, the most dominant industry is petroleum. A large number of oil companies drill in the areas near Salt Lake City. Coal is important as well.

The Utah White Pages Phone Directory Database includes residential phone and address data for the state of Utah. These listings are updated on a 90 day basis to contain the freshest possible phone directory data.