Download our Virginia White Pages Residential Database List. This database contains 2,905,656 records of Virginia Consumers locations and leads. The VA Phone Book Marketing Database can be downloaded in CSV, MySQL and many other formats. 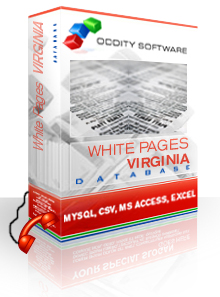 Virginia is a southern state that was named after Queen Elizabeth the first, who was given the nickname the "Virgin Queen." Virginia is one of the few states in the U.S. to be considered a commonwealth. It should also be noted that Virginia is one of the thirteen colonies that were first formed in the continental U.S. While the largest city in the state is Virginia Beach, the capital city is Richmond. It should also be noted eight American Presidents were born in Virginia, more so than any other state. It has a total population of 7.5 million, and it was admitted to the Union in June of 1788. The climate of this state is considered to be quite mild.

Because Virginia is located near the Atlantic Ocean, it is typically home to extreme weather conditions such as Hurricanes. However, because most Hurricanes become much weaker by the time they reach this state, it is much less likely to see the type of damaged that is witnessed in Gulf coast states like Louisiana. Economically, Virginia is one of the most prosperous states in the U.S. Its GSP for 2004 was in excess of $320 billion. A recent article from Forbes magazine credited Virginia is being one of the states with the best business climate. Virginia is known for having a high level of economic growth with a quality of life that is not as high many other states. It should also be noted that the economy of this state is highly diversified.

The Virginia White Pages Phone Directory Database includes residential phone and address data for the state of Virginia. These listings are updated on a 90 day basis to contain the freshest possible phone directory data.