Download our Connecticut White Pages Database List. This database contains 1,387,770 records of Connecticut Consumers locations and Connecticut Residential leads. This phone book database can be downloaded in CSV, MySQL and many other formats. 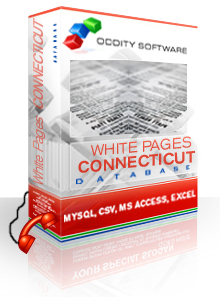 Connecticut is a U.S. state that is located in the New England region. The lower portion of this state is considered to be a part of the New York metropolitan area. Historically, Connecticute was one of the original thirteen colonies. When it comes to median household income, this state ranks number one. Connecticut is home to a large number of millionaires, and it is one of the most densely packed states in the country. Even though the population is much lower than other states at 3.4 million, the state itself is one of the smallest in the country. New Jersey was admitted to the Union in 1788, and while the capital is Hartford, the largest city is Bridgeport.

The climate of this state could best be described as being humid continental. Because it lies next to the Atlantic Ocean, it may have extreme weather during various seasons. The Official nickname for Connecticut is "The Constitution State," and it is also referred to as "The Nutmeg State." Despite its size, the GSP for Connecticut was $187 billion in 2004, making it one of the most prosperous states in the New England region. This state has a high cost of living, and it has had an adverse affect on many households. The cost for heating during the winter months is very expensive, and the cost of real estate is very high in proportion to the rest of the nation. Prior to 1991, Connecticut did not have an income tax. Today, the income tax ranges from 3 to 5%.

The Connecticut White Pages Phone Directory Database includes residential phone and address data for the state of Connecticut. These listings are updated on a 90 day basis to contain the freshest possible phone directory data.