Download the District of Columbia White Pages Database. This database contains 249,143 records of D.C. Residents locations and D.C. Residents leads. This content database can be downloaded in CSV, MySQL and many other formats. 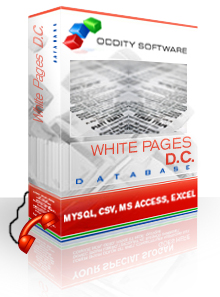 Washington DC is the capital of the United States, and it is considered to be a district rather than a state. It is formally known as the District of Columbia, and it is from this that the abbreviation "D.C." is derived. Washington DC is a federal city, and it was named after George Washington, the first U.S. President. Congress has been given full power over the region, and the citizens who live here have a different status than American citizens who live in other states. As can be expected, Washington DC is the center for government institutions. It is the home of the White House and various other landmarks. While the Washington DC metropolitan area has a population of about 8 million, the city proper has a population of about 600,000.

Washington DC has a climate that is very similar other Mid-Atlantic states. Because the region can get hot during summer, thunderstorms are a common occurence. While Hurricanes may sometimes hit the region, they will have generally become too weak to cause serious damage. Because of the many national landmarks in Washington DC, it is a center for tourism, and this is one of its most populat industries. In addition the this, the U.S. government is the largest employer in the region. Statistics show that over 25% of the population is employed by the federal government. The GSP for Washington DC was $75 billion in 2004, and it was named one of the top climates for business by various financial magazines. However, Washington DC has been notorious for its high crime rate, which has ranked as one of the highest in the country. Despite this, efforts are being made to combat this problem.

The D.C. White Pages Phone Directory Database includes residential phone and address data for the state of D.C.. These listings are updated on a 90 day basis to contain the freshest possible phone directory data.