Updates
This Database is updated every 120 Days. Master License holders can purchse updates for this database for $175.00.
PUBLICATION RIGHTS
$1,200.00 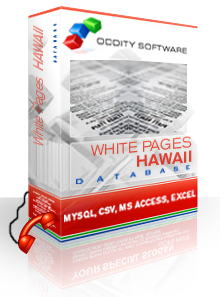 Hawaii is a tropical state that became part of the U.S. in 1959. Prior to this, the island had been inhabited by Polynesian settlers for hundreds of years. The total population for this state is over 1.2 million, and the median income is just over $53,000, making Hawaii one of the highest states in the U.S. Hawaii is the only state that does not border another U.S. state, and it is also the only state that is surrounded by water. The largest city in this state is Honolulu, and this state is known for having a large number of national parks. It should also be noted that Hawaii has the largest percentage of Asian Americans of any state in the U.S.

The two recognized languages in Hawaii are Hawaiian and English. However, a number of other languages are prominently spoken, including Japanese, Chinese, and Tagalog. The economy of Hawaii has been traditionally dominated by pineapple, whaling, military, and sugarcane. Tourism is one of the largest industries, and it continues to be one of the largest industries in the state. Statistics show that the tourism industry accounts for over 20% of the Gross State Product. As of this writing, a number of efforts are being made to make the Hawaiian economy more diversified. In addition to tourism, Hawaii is also responsible for exporting food and apparel. The state tax in Hawaii is one of the highest in the nation, and the typical resident has to pay well over $2,000 in taxes at the state level.

The Hawaii White Pages Phone Directory Database includes residential phone and address data for the state of Hawaii. These listings are updated on a 90 day basis to contain the freshest possible phone directory data.