Download our Iowa White Pages Residential Database List. This database contains 1,163,054 records of Iowa Consumers locations and leads. The IA Phone Book Marketing Database can be downloaded in CSV, MySQL and many other formats. 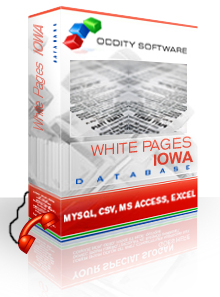 Iowa is a state that is located in the Midwestern portion of the U.S. It joined the Union in December of 1846, and it has a total population of 2.9 million. While the state is relatively small in population, it is larger in area. The name was taken from Native American groups that lived in the region. The states which border Iowa are South Dakota, Nebraska, and Minnesota. Much of the geography of this state is comprised of rolling plains. The largest city in the state is Des Moines, and this is also the capital. The climate of Iowa is continental. The winters bring in ample amounts of snow, and the summers can become hot and humid. A sizable percentage of this state is comprised of farmland.

Like many states in the Midwest, Iowa has experienced a large migration out of the state. Many of the people who move out of Iowa are students who recently graduated from college. Despite this, the GSP for the state was $103 billion in 2003. It is known for its agricultural products, and some of the products which are prominent produced in this state are dairy products, soybeans, and corn. When it comes to industrial products, chemicals and electrical equipment is popular. Of all the states in the U.S., Iowa produces the most ethanol. Another industry which is very prominent, especially in the Des Moines area, is insurance. A tax is placed on the net income of individuals who work in the state, and this tax may also be placed on estates. The income tax for Iowa is broken down into nine sections.

The Iowa White Pages Phone Directory Database includes residential phone and address data for the state of Iowa. These listings are updated on a 90 day basis to contain the freshest possible phone directory data.