Updates
This Database is updated every 120 Days. Master License holders can purchse updates for this database for $200.00.
PUBLICATION RIGHTS
$1,400.00 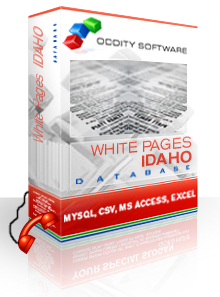 Idaho is a U.S. state that is located in the Pacific Northwest. The capital city is Boise, and this is also the largest city. Idaho is the 43rd state to be added to the Union, and it was admitted in July of 1890. The population of Idaho is one of the smallest in the nation, at only 1.3 million. Idaho has a wealth of natural resources, and it has been called the Gem State. The states which border Idaho are Wyoming, Montana, Washington, Oregon, and Nevada. A sizeable percentage of the state comprises the Rocky Mountains, and the state has a large number of canyons. The climate of Idaho will vary greatly at different times of the year. While the temperatures in the summer can be high, they can drop below zero in the winter.

The GSP for Idaho in 2004 was just over $43 billion. The state is famous for potatoes, and agriculture continues to play an important role in its economy. Some of the other products it produces are cattle, wheat, beans, and dairy products. There are also a number of industrial sectors in Idaho, and some of them are chemicals, paper, and machinery. Recently, this state is becoming a center for technology and science. Statistics show that technical fields make up about 25% of the revenue that the state generates. Boise has become a center for the production of semiconductors. A number of prominent corporations are based on the state, and Micron Technology, a producer of DRAM, is based in Boise.

The Idaho White Pages Phone Directory Database includes residential phone and address data for the state of Idaho. These listings are updated on a 90 day basis to contain the freshest possible phone directory data.