Download our Kansas White Pages Residential Database List. This database contains 1,050,830 records of Kansas Consumers locations and leads. The KS Phone Book Marketing Database can be downloaded in CSV, MySQL and many other formats. 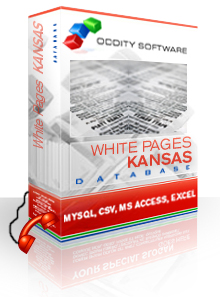 Kansas is a U.S. state that lies in the Midwest. It is named after the river that flows through it, and while the biggest city is Wichita, the capital is Topeka. Like Oklahoma, Kansas is located in the heart of the United States. After the Civil War, the population of the state greatly increased due to the arrival of immigrants. Currently, Kansas is one of the most prominent states in the U.S. when it comes to agriculture. It is the country's largest producer of wheat. The total population of this state is 2.6 million, and it was added to the Union in January of 1861. Kansas is a landlocked state that is bordered by Oklahoma, Nebraska, Colorado, and Missouri. A sizable percentage of the geography is a part of the Great Plains.

The climate for Kansas is humid continental. The state experiences a tremendous number of tornadoes each year, and the state became famous in the Wizard of Oz story, which dealt with a tornado. A number of statistics indicate that at least 50 tornadoes appear in the state each year. In recent years, Kansas has experienced a reduction in its population. Statistics show that there are at least 6,000 ghost towns in the state, and reasons that are cited for this migration out of the state are water shortages and drought. Many of the people who have left the state are students who recently graduated from college. Despite this, the GSP for Kansas was almost $100 billion in 2003, placing it above many other states in the region.

The Kansas White Pages Phone Directory Database includes residential phone and address data for the state of Kansas. These listings are updated on a 90 day basis to contain the freshest possible phone directory data.