The Massachusetts White Pages Phone Directory Database includes residential phone and address data for the state of Massachusetts. These listings are updated on a 90 day basis to contain the freshest possible phone directory data.

Updates
This Database is updated every 120 Days. Master License holders can purchse updates for this database for $350.00.
PUBLICATION RIGHTS
$2,800.00 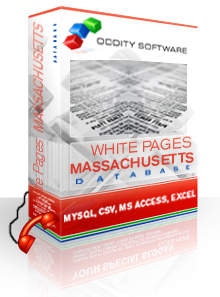 Massachusetts is a U.S. state in the New England area that is considered to be a commonwealth. Even though the state is relatively small in terms of area, it has a population of about 6.4 million. While the eastern portion of this state is mostly urban, the western portion is still highly rural. The largest city in this state is Boston, and it is also the capital. Historically, the first European settlers to arrive in this region were the Puritans, as well as the Pilgrims. Massachusetts was one of the most prominent states to be involved in the revolution against British rule. This state is also known for its progressivism, and it was one of the most prominent states for the abolition of slavery. The climate for Massachusetts is considered to be humid continental.

The GSP for Massachusetts was $318 billion in 2004. This makes it one of the most prosperous states in the U.S. The only state to surpass it in personal income is Connecticut. Massachusetts is known for producing a number of agricultural products, and some of them are seafood, electronic tools, and scientific products. In addition to this, some of the industries which are very prominent are finance, tourism, health services, and education. The Massachusetts Institute of Technology is an Ivy League college that is a world leader in cutting edge technology. One of the most popular agricultural products in this state is cranberries. The personal income tax in Massachusetts is approximately 5.3%. Any retail sales that are made will be subject to a 5% tax.

The Massachusetts White Pages Phone Directory Database includes residential phone and address data for the state of Massachusetts. These listings are updated on a 90 day basis to contain the freshest possible phone directory data.