Updates
This Database is updated every 120 Days. Master License holders can purchse updates for this database for $175.00.
PUBLICATION RIGHTS
$1,400.00 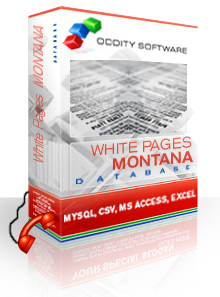 Montana is a U.S. state that is located in Northwest. It should also be noted that sizable portions of this state also comprise the Great Plains. There are a large number of mountains in Montana, and the geography is quite mountainous. Montana has one of the lowest populations in the U.S., despite the large size of the state by area. The three industries that make up the bulk of its economy are lumber, agriculture, and the extraction of minerals. It should also be noted that Montana is home to a number of famous national parks, and tourism also comprises an important part of its industry. Millions of people tour the state on an annual basis.

The total population for the state is just under a million people. This state is the 41st to be admitted to the Union, and it was added in November of 1889. While the geography of this state is quite diverse, the Rocky Mountains makes many parts of the state quite rugged. Montana has a sizable number of rivers, and hydropower is an important source of energy in the state. The GSP for Montana was $26 billion in 2003. It should be noted that the economy has grown rapidly in the last three years. A sizable percentage of the state's economy is based on agriculture. Some of the products which are produced here are cherries, honey, wheat, and oats. Mineral extraction is a crucial industry, and gold and silver are very important minerals. Tourism is also an important industry.

The Montana White Pages Phone Directory Database includes residential phone and address data for the state of Montana. These listings are updated on a 90 day basis to contain the freshest possible phone directory data.