Download the North Dakota White Pages Database. This database contains 270,423 records of locations and leads. This content database can be downloaded in CSV, MySQL and many other formats. 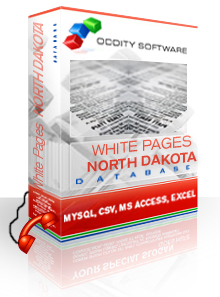 North Dakota is a U.S. state that is located in the Midwest. Geographically, it is located in the northern part of the Great Plains, and the state was named after Native American groups that resided in the area. North Dakota was admitted to the Union in 1889, and it was the 39th state to be added. While the capital of this state is Bismarck, the largest city is Fargo. It has the lowest population of any state in the U.S. at just under 640,000. The only exception to this is Wyoming. Despite this, North Dakota is one of the largest states in the region by area. The climate for North Dakota could be described as being continental. There are few bodies of water in this state, and while the summers can be quite hot, the winters can be extremely cold.

A large number of the residents have been moving out this state since the 1980s. One of the primary reasons for this is because college graduates can't find many jobs in the state once they finish school. The issue of migration out of the state has played an important role in the politics of the state government. The GSP for North Dakota was $24 billion in 2005, making it one of the lowest states in the nation. Despite this, the state is a leader in the production of various crops. Some of the crops which are important in this region include canola, wheat, sunflowers, and soybeans. A sizable percentage of this state is comprised of farms, and honey is prominently produced in the central regions. While it does produce a bit of petroleum and electrical products, it is relatively small in comparison to other states.

The North Dakota White Pages Phone Directory Database includes residential phone and address data for the state of North Dakota. These listings are updated on a 90 day basis to contain the freshest possible phone directory data.