Download the Nebraska White Pages Database. This database contains 650,414 records of locations and leads. This content database can be downloaded in CSV, MySQL and many other formats. 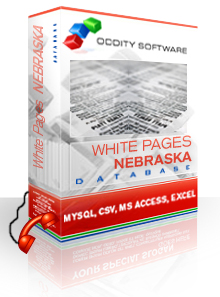 Nebraska is a state that is located in the Great Plains section of the U.S. Today, it is one of the top farming states in the nation. While the capital city is Lincoln, the largest city in the state is Omaha. Nebraska has a population of 1.7 million, and it was admitted to the Union in March of 1867. The size of the population is out of proportion of the size of the state, which is quite large. This has allowed a large portion of the land to be used for farming purposes. The states which border Nebraska are Colorado, Kansas, Iowa, Wyoming and Missouri. Geographically, the land which comprises this state the most are the Great Plains. Much of this region is comprised of rolling hills.

The climate of the state may vary based on location. While the western portion of the state is more semiarid, the eastern part of the state has a continental climate. Like many states in the Midwest, Nebraska has experienced what is called rural flight. Many residents, especially those who are college graduates, have left the region to move to other places. A number of studies show that the GSP for the state was almost $70 billion in 2004. Much of the economy is based on farming, and sizable percentage of the land is comprised of farms. Some of the products that it produces are soybeans, beef, and corn. The state is famous for its beef, and it is also a center for manufacturing, insurance, and information technology.

The Nebraska White Pages Phone Directory Database includes residential phone and address data for the state of Nebraska. These listings are updated on a 90 day basis to contain the freshest possible phone directory data.