Download the New Hampshire White Pages Database. This database contains 542,545 records of locations and leads. This content database can be downloaded in CSV, MySQL and many other formats. 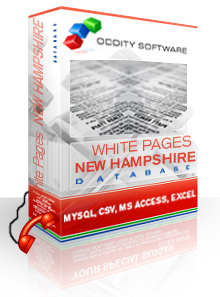 New Hampshire is a U.S. state that can be found in the New England area. New Hampshire is one of the original thirteen colonies, and it was the very first state in the country to draft its own constitution. This state is known for having a large number of recreational activities, and it is a prominent center for winter sports. People come to New Hampshire from around the world for skiing and other activities. The state has a small population of just 1.2 million, and like many states in the New England region, it is relatively small in size. New Hampshire was admitted to the Union in June of 1788. The two states which border it are Maine, Vermont, and Massachusetts, and it is bordered by Canada to the north.

Prior to the arrival of European settlers, New Hampshire was inhabited by numerous Algonquian Native American groups. The GSP for this state was $49 billion in 2003, and the state is known for producing agricultural products like apples, eggs, and dairy products. While the manufacture of textiles has traditionally been prominent in this state, it became much more diversified by the end of the 20th century. Because the cost of manufacture is lower in the southern states, many of these industries have become weaker, and have not played a prominent role in the New Hampshire economy. New Hampshire does not have a sales tax or even a personal income tax. Many people have moved into the state because of these tax advantages, and the economy has become much more diversified.

The New Hampshire White Pages Phone Directory Database includes residential phone and address data for the state of New Hampshire. These listings are updated on a 90 day basis to contain the freshest possible phone directory data.