Download the Nevada White Pages Database. This database contains 980,374 records of locations and leads. This content database can be downloaded in CSV, MySQL and many other formats. 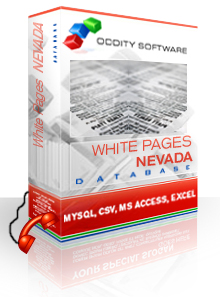 Nevada is a state that is located in the western portion of the U.S. It is famous for its gambling industry, as well as its legalized prostitution, and it is the only state to legalize the latter. While the capital of this state is Carson City, Las Vegas and Reno are two of its most well known cities. Nevada has been given the nickname "The Silver State," due to the mining of silver that was conducted during its early days. Nevada fought on the side of the Union during the Civil War, and it was given the name "The Battle Born State." The Census in 2000 showed that this state had a population of 1.9 million, though it has grown a bit since this time. Like Utah, a sizable portion of this state is uninhabited, and the major centers for the population are Las Vegas, Reno, and Carson City.

In its early days, mining was an important part of Nevada. However, states such as Colorado begin to challenge it in the 19th century, and it was difficult for the state to compete. Despite this, the discovery of silver and the legalization of gambling allowed the state to be prosperous. The legalization of gambling allowed Nevada to thrive during the Great Depression, a time in which many states suffered. The GSP for Nevada in 2003 was $88 billion. The principle industries in Nevada are tourism, food processing, and the production of electrical equipment. Tourism has also played an important role in its economy, since travelers from around the world come to visit Reno, Las Vegas, and Lake Tahoe. In the smaller areas outside of the larger cities, mining and cattle continue to be important contributions to the economy. Gold is the most prominent mineral.

The Nevada White Pages Phone Directory Database includes residential phone and address data for the state of Nevada. These listings are updated on a 90 day basis to contain the freshest possible phone directory data.