Download the Ohio White Pages Database. This database contains 5,045,420 records of Ohio Residents locations and Ohio Residents leads. This content database can be downloaded in CSV, MySQL and many other formats.

Updates
This Database is updated every 120 Days. Master License holders can purchse updates for this database for $375.00.
PUBLICATION RIGHTS
$3,000.00 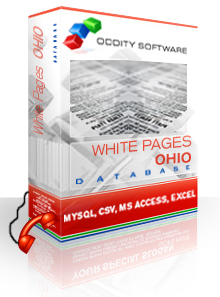 Ohio is a U.S. state that can be found in the Midwest. Many of the people who originally settled in this state were those who came Appalachia, the South, or New England. While the largest city in this state is Columbus, the Cleveland Metropolitan area is larger. It should also be noted that Columbus is the capital. The total population of this state is approximately 11.3 million. It was admitted to the Union in March of 1803. The geography of this state has played an important role in its economic success. Ohio acts as a connector between the Midwest and Northeast, and much of the nation's cargo vehicles must pass through the state.

Lake Erie lies to the north, and this gives Ohio a seaport advantage. The states which border Ohio are Indiana, Michigan, Kentucky, Pennsylvania, and West Virginia. The climate for this state is humid continental, and this state has a number of prominent cities. Some of them are Columbus, Cleveland, Cincinnati, Dayton, and Toledo. Economically, the industries which are the most prominent include rubber, steel, and processed foods. It should also be noted that the airplane was invented in this state by the Wright brothers. Ohio is also home to important federal government centers like the Wright-Patterson Air Force Base. The GSP for Ohio was over $400 billion in 2004, making it one of the wealthiest states in the country. Ohio is also known for its agriculture, and produces products such as poultry, corn, electrical products, soybeans, and dairy products.

The Ohio White Pages Phone Directory Database includes residential phone and address data for the state of Ohio. These listings are updated on a 90 day basis to contain the freshest possible phone directory data.