Download the Oregon White Pages Database. This database contains 1,574,533 records of locations and leads. This content database can be downloaded in CSV, MySQL and many other formats. 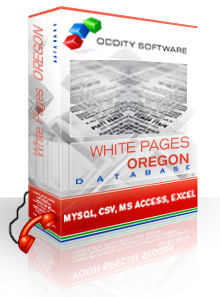 Oregon is a state that is located in the Pacific Northwest. The states which border it are Nevada, California, Washington, and Idaho. Of all the states in the U.S., Oregon has one of the most diverse climates. It has volcanoes, a coastal area, and thick forests. The population for this state is approximately 3.5 million, and while the capital city is Salem, the largest city is Portland. It was admitted to the Union in February of 1859, and the state was previously inherited by Native American groups such as the Bannock and Klamath. The state is home to a large number of beavers, and it has been given the name "The Beaver State."

Because of Oregon's diverse geography, it has a very rich economy. It is especially prominent in the areas of agriculture, and some of the products that it produces are fruits, potatoes, and dairy products. The wine industry is this state is quite prominent. Because of the thick forests which are present in the state, Oregon has a very vibrant lumber industry. Since the 1970s, Oregon has become an important center for advanced technology. However, the burst of the dot com bubble in 2001 had an adverse impact on the economy of this state. Oregon is home to a number of large companies, and one of the most prominent is Nike. Because it is a coastal state, Oregon has one of the largest fishing industries in the nation, particularly for salmon. Because of its beauty, tourism has also played an important role in the economy of Oregon.

The Oregon White Pages Phone Directory Database includes residential phone and address data for the state of Oregon. These listings are updated on a 90 day basis to contain the freshest possible phone directory data.