Download the Rhode Island White Pages Database. This database contains 421,438 records of locations and leads. This content database can be downloaded in CSV, MySQL and many other formats.

Updates
This Database is updated every 120 Days. Master License holders can purchse updates for this database for $150.00.
PUBLICATION RIGHTS
$1,200.00 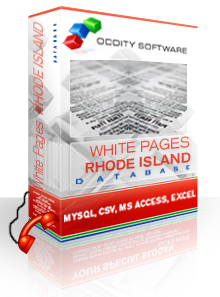 Rhode Island is a U.S. state that can be found in the New England region. It is the smallest state in terms of its area, and it was one of the original thirteen colonies. While it was the very first state to break apart from Britain, it was the very last state to seek the ratification of the U.S. Constitution. Rhode Island has a population of just over 1 million, and it was admitted to the Union in May of 1790. The states which border Rhode Island are Connecticut and Massachusetts. The climate for this region is considered to be humid continental. While the state experiences a great deal of rain during the summer, the winters can be cold with lots of snowfall.

Textile has always played an important role in the economy of this state, and it still does today. However, it does not have the prominence that it had in the past. Economically, Rhode Island has become much more diversified, and a number of Fortune 500 companies operate here. In addition to this, there are a few Fortune 1000 companies in the state as well. The GSP for Rhode Island in 2000 was $33 billion. While textiles was the most prominent industry in the past, it has since been replaced by health services. The next most important industry is tourism, which has created approximately $39,000 jobs. Tourism alone is a multi-billion dollar industry in Rhode Island. After tourism, manufacturing is the next most important industry, and this state is known for producing machinery and various metal products.

The Rhode Island White Pages Phone Directory Database includes residential phone and address data for the state of Rhode Island. These listings are updated on a 90 day basis to contain the freshest possible phone directory data.