Download the Washington White Pages Database. This database contains 2,677,666 records of locations and leads. This content database can be downloaded in CSV, MySQL and many other formats. 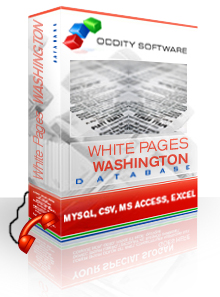 Washington is a U.S. state that is located in the Pacific Northwest. It was named after George Washington, and it was admitted to the Union in 1889. Statistics from 2006 show that the state has a population of approximately 6.3 million. While the capital of the state is Olympia, the largest city is Seattle. Because Washington is located near the Pacific Ocean, it has a mild ocean climate. While the western portion of the state can have extreme weather conditions, the eastern portion of the state is much warmer and dry. Winters can become quite cold, and prior to the arrival of European settlers, Washington state was home to Native American tribes that had a unique culture.

The GSP for Washington state was $268 billion in 2005, placing it in the top 20 wealthiest states. This state is home to tremendous business growth, and some of the Fortune 1000 companies which are based here include Amazon.com, Microsoft, and the American branch of Nintendo. Washington state is a leader in electronics, biotechnology, and mining. The state has also invested tremendous amounts of money in hydroelectric power. Washington does not have a personal income tax, and the state doesn't collect a tax from corporations. The sales tax for the state is 6.5 percent, but many foods are not included. Despite this, property taxes are heavily collected, and this comprises 30% of the income that is made by the state government. Washington is also home to important cities like Seattle, Tacoma, and Olympia.

The Washington White Pages Phone Directory Database includes residential phone and address data for the state of Washington. These listings are updated on a 90 day basis to contain the freshest possible phone directory data.