Download the Wisconsin White Pages Database. This database contains 2,293,914 records of locations and leads. This content database can be downloaded in CSV, MySQL and many other formats. 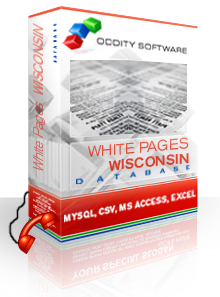 Wisconsin is a state that is located in the Great Lakes area of the U.S. The capital of the the state is Madison, and Wisconsin was admitted to the Union in May of 1848. During the Civil War, Wisconsin fought on the side of the Union. The climate in this state is excellent for growing crops. The winters are exceptionally cold, and the state is known for its low temperatures. The GSP for Wisconsin was $211 billion in 2004, making it one of the wealthiest states in the nation. The most important industries of this state are manufacturing and agriculture. Historically, Wisconsin has been known for being a farm state. This remains true today, since Wisconsin produces more dairy products than any other state, with the exception of California.

In addition to dairy products, Wisconsin also produces cranberries, silage, and corn. It is the leader in the nation when it comes to the production of cheese. Not only is Wisconsin the nation's leader when it comes to the production of cheese, it can produce more quality cheese products in a single day than any other nation in the world. In addition to cheese production, Wisconsin is well known for its beer production. One of the largest producers of beer is the Miller Brewing Company. It should also be noted that Wisconsin is a prominent state for education. The University of Wisconsin Madison is a prominent university that has played an important role in the economy of the state, as well as the nation.

The Wisconsin White Pages Phone Directory Database includes residential phone and address data for the state of Wisconsin. These listings are updated on a 90 day basis to contain the freshest possible phone directory data.