Download our Louisiana White Pages Residential Database List. This database contains 1,517,571 records of Louisiana Consumers locations and leads. The LA Phone Book Marketing Database can be downloaded in CSV, MySQL and many other formats. 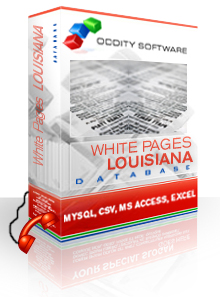 Louisiana is a southern state that is known for having a rich and diverse cultural history. The capital of this state is Baton Rouge, and New Orleans is the most prominent city. The state was given its name in honor of Louis XIV, one of the most powerful kings in French history. The states which border Louisiana are Mississippi, Texas, and Arkansas. The Gulf of Mexico sits to the south. Louisiana was admitted to the Union in April of 1812, and the current population of the state is approximately 4.4 million. Like many states in the south, the climate is humid subtropical. While the summers are hot, the winters are mild. This state is also known for having a large number of tornadoes, and it is quite vulnerable to hurricanes.

There were a number of Native American tribes that inhabited this region before the arrival of European settlers. Some of the groups that were prominent in this state included the Chitimacha, Atakapa, and the Houma. Napoleon sold Louisiana to the U.S. government in 1803, and the region retains a strong French background into the present day. The total GSP for this state was 140 billion in 2003, and the principle industries are agriculture, petroleum, tourism, paper, and transportation. Food processing is also an important industry in this region. Louisiana is a very unique state. It has rich cultures which include the Creole people and the Cajun people, who speak French. The traditional cuisine if this state is quite distinct from many other states, including those that are located in the Deep South.

The Louisiana White Pages Phone Directory Database includes residential phone and address data for the state of Louisiana. These listings are updated on a 90 day basis to contain the freshest possible phone directory data.